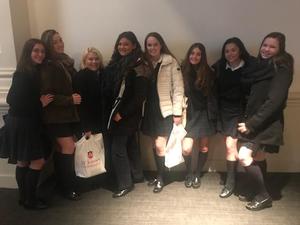 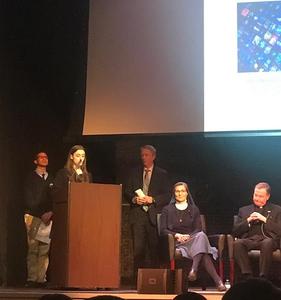 On March 8th, a group of NDA High School student leaders from Student Government and National Honor Society were selected to attend the third annual Student Leadership Conference at the Sheen Center for Thought and Culture. The theme of the conference was, “The Media Landscape: A Catholic Lens.”

The conference focused on bias in the media and emphasized the importance of viewing both sides of a story in the culture of the 24-hour news cycle. The panel also spoke about how social media can be used to spread false information, both in our personal lives and in the news. After speaking about the topic, the panel then opened the floor for questions. The students took notes and were eager to interact with the panel, and one of our students, Ruby Fishman, was selected to ask a question.

The superintendent chose NDA to give the closing remarks, which junior Isabella Acierno delivered. She was one of 240 students from 31 Catholic high schools to attend the conference.

Isabella went into the conference with an open mind and was happy that the students were all given a place to respectfully voice their own thoughts and opinions. After leaving, Isabella said she wants to be more aware of what is going on in the world by reading the news more and asking questions.

She was also quoted for an article by Catholic New York: